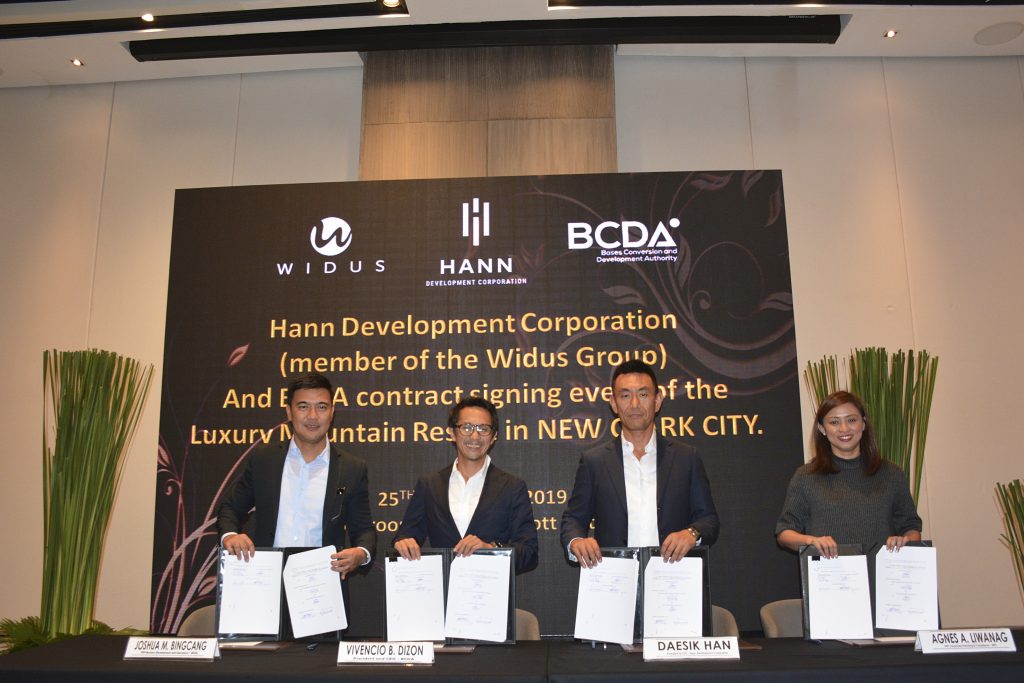 25 October 2019, New Clark City, Tarlac — The Widus Group (Widus), owner and developer of the Widus Hotel & Casino and the Clark Marriott Hotel, and the Bases Conversion Development Authority (BCDA) signed a lease agreement for the development of the Hann Lux, a luxury mountain resort in New Clark City. Among the establishments to be developed are global hospitality brands such as the Banyan Tree Hotel, Angsana Hotel, Westin and Luxury Collection by Marriott.

Under the agreement, Widus will lease 450 hectares of land within New Clark City with an investment commitment of Php12 billion.

The luxury mountain resort will be located in the southernmost portion of New Clark City. Phase 1 of the leisure resort shall include the development of the Angsana Hotel and the Banyan Tree Hotel — a leading global hospitality group that is rooted in its ethos of sustainability “Embracing the Environment, Empowering People” for sustainable tourism development; an 18-hole championship golf course, and a clubhouse. The development of the first phase with a total investment of Php5 billion is pegged for completion within five (5) years. Meanwhile, Phase 2 includes the development of Westin and Luxury Collection by Marriott, two 18-hole championship golf courses, outdoor recreation facilities, premium villas and residences, a mixed-use commercial center, and a 10-hectare public park for a total investment of Php7 billion.

Dae Sik Han, President and CEO of Hann Development Corporation, a member of the Widus Consortium, expressed his optimism for this venture and hopes it will draw even more visitors to New Clark City.

“Clark is fast becoming one of the top destinations in Northern Luzon for both tourists and investors. We hope to attract more with the development of a new leisure resort in New Clark City, one that is in keeping with the vision of BCDA,” Han said.

“We’re fortunate to partner with the Widus Group for this new leisure attraction as they share with us the vision for New Clark City to be green, resilient, and sustainable. Part of the agreement is the use of nature and Filipino-inspired architecture for the luxury mountain resort to showcase local culture and tradition which the Hann Group is known for,” BCDA President and CEO Vince Dizon said.

Located 100 kilometers north of Metro Manila, New Clark City is a 9,450-hectare development envisioned to decongest the capital. It will feature smart technologies and mixed-use developments including a world-class government center, sports hub for national athletes, and educational centers. Phase 1A of New Clark City is 99% completed and houses the new Athletics Stadium and Aquatics Center which are ready for this year’s 30th SouthEast Asian Games.